Matthew creasey
General thesis introduction
Group-living occurs throughout the animal kingdom. And yet, the degree of social complexity within groups varies markedly across taxa. In particular, while many social insects establish colonies of thousands, with complex divisions of labour and full eusociality (Anderson and Ratnieks, 1999; Bourke, 1999), social complexity among vertebrates is much more limited. In mammals, for example, division of labour is rare and eusociality has been documented in just two species: Damaraland mole rats, Cryptomys darnarensis, and naked mole rats, Heterocephalus glaber (Jarvis, 1981; Jarvis and Bennett, 1993). In birds, eusociality is not known to occur at all. The evidence suggests that for more complex forms of sociality to evolve, individuals must live in stable groups of increasing size, where interactions among the same individuals are frequent (Anderson and Ratnieks, 1999; Bourke, 1999; Freeberg, Dunbar and Ord, 2012; Ferguson-Gow et al., 2014; Dunbar, 2018). In vertebrates, although many species form large aggregations (take, for example, the herds of ungulates seen on the African plains), in many cases, the fluid social structure of these groupings means that stable relationships among individuals, and therefore more complex forms of interaction and social structure, do not develop (Freeberg, Dunbar and Ord, 2012). For a definition of social complexity, and a clarification of the term’s use within this thesis, see Table 1.

In vertebrate taxa, with the exception of primates, the most complex examples of sociality tend to be cooperative breeders. This reproductive system, in which breeders are assisted by non-breeding ‘helpers’ to raise their young, occurs in at least 3% of mammal species and 9% of birds (Komdeur et al., 2017), but since Darwin (1859) has posed a major challenge to our understanding of evolutionary processes: how could selection favour individuals directing care towards young that are not their own? A solution to this challenge has finally been reached through a synthesis of work spanning six decades, which suggests that cooperative breeding is associated with unpredictable and challenging environments, where cooperation increases the chances of reproducing successfully under ecological constraints (Jetz and Rubenstein, 2011; Cornwallis et al., 2017; Griesser et al., 2017; Shen et al., 2017). In such circumstances, non-breeders accrue fitness by delaying dispersal from the natal territory to act as helpers for, and increasing the reproductive success of their close relatives (Covas & Griesser, 2007; Emlen, 1982; Hamilton, 1964a, 1964b; Hatchwell & Komdeur, 2000; Komdeur et al., 2017). Importantly with regard to the evolution of more complex sociality, in many cooperative vertebrates, reproductive success increases with carer number (Jennions and Macdonald, 1994; Magrath, 2001), generating selection on increasing group size, while delayed dispersal results in prolonged relationships among individuals. Indeed, it has been suggested that kin-selected cooperative breeding could be a critical precursor to the evolution of full eusociality (Hughes et al., 2008).

However, even among cooperative vertebrates there is significant variation in both group size and social complexity (which as I have discussed, are likely to be linked (Bourke, 1999; Ferguson-Gow et al., 2014; Dunbar, 2018)). Among birds, for example, at the more complex end of the range, Southern pied babblers (Turdoides bicolor) form stable, kin-structured social groups of up to 15 individuals. Within these groups there is a strict social hierarchy, established (often through fierce fighting) prior to breeding (Raihani et al., 2010; Ridley, 2016). Once this hierarchy is in place, reproduction by subordinates is rare (Nelson-Flower et al., 2011). This species exhibits complex forms of social interaction and cooperation, often mediated via a large repertoire of vocalisations (which in itself can be a strong indicator of social complexity (Freeberg, Dunbar and Ord, 2012)). For example, in addition to an array of alarm calls made by the group (Ridley, 2016), sentinels will also frequently take exposed positions, from which they give specific alarm calls to alert other group members when a threat is seen (Ridley, Nelson-Flower and Thompson, 2013). Adults will also make ‘recruitment calls’, which direct inexperienced foragers to food-patches (Radford and Ridley, 2006) and experimental evidence even suggests that adults actively teach young, by giving specific vocalisations which indicate food (Raihani and Ridley, 2008). Cooperative behaviours amongst adults are highly coordinated, such that carers synchronously provision the young: a behaviour which increases reproductive success, likely because fewer nest-visits makes it harder for predators to locate the nest site (Raihani et al., 2010). Finally, this species shows a form of division of labour, whereby some individuals stay at the nest area to provision and defend the young, while others conduct border defence of the territory (Ridley, 2016). In contrast, long-tailed tits (Aegithalos caudatus) exhibit a form of cooperative breeding where social complexity is relatively limited. In this species, although during the winter, kin do aggregate into groups of 6 – 30 individuals (Gaston, 1973; Hatchwell, Anderson, Ross, Fowlie, & Blackwell, 2001), at the start of the breeding season groups disband and all birds attempt to breed as pairs (Hatchwell, Russell, Fowlie, & Ross, 1999). Cooperation is facultative and individuals only become helpers should they fail to reproduce successfully themselves (MacColl and Hatchwell, 2002). This means that pairs may remain without helpers, and group sizes do not exceed 5 (Maccoll and Hatchwell, 2003). At cooperative nests, there is no evidence that the group as a whole coordinate provisioning visits to the nest, as evidenced by the higher overall number of visits at nests with helpers (Maccoll and Hatchwell, 2003), which may explain the very high nest-predation rates (Bebbington & Hatchwell, 2016; Hatchwell et al., 1999). The vocal repertoire of this species is limited, with 5 main calls (Sharp and Hatchwell, 2005). Finally, there is no evidence for more complex forms of cooperation and sociality, such as sentinel behaviour, teaching or division of labour in long-tailed tits.

In both the examples above, as in many other cooperative vertebrates, in addition to the general benefits of larger group sizes, such as increased competitive ability against other con-specific groups (Janson & van Schaik, 1988; Wrangham, 1980) and reduced predation risk (Wrona and Jamieson Dixon, 1991), reproductive success over the long-term increases with helper-number (Hatchwell et al., 2004; Jennions & Macdonald, 1994; Magrath, 2001; Ridley, 2016). Thus, in cooperative breeders, there is expected to be particularly strong selection on increasing group size. However, a fundamental challenge posed by increasing group size is finding food for increasing numbers of individuals (Korb and Heinze, 2016). Thus, variation in the ability to overcome this challenge may, in part at least, explain observed variation in group size, and therefore social complexity among cooperative vertebrates. And increasingly, evidence suggests that three forms of individual specialisation may play an important, but so far underexplored role in enabling groups of increasing size to optimise resource acquisition. These are (1) specialising to a task under division of labour (DoL), (2) specialising to a foraging niche and (3) personality variation (the latter as a possible mediator of the previous two) (see definitions in Table 1). 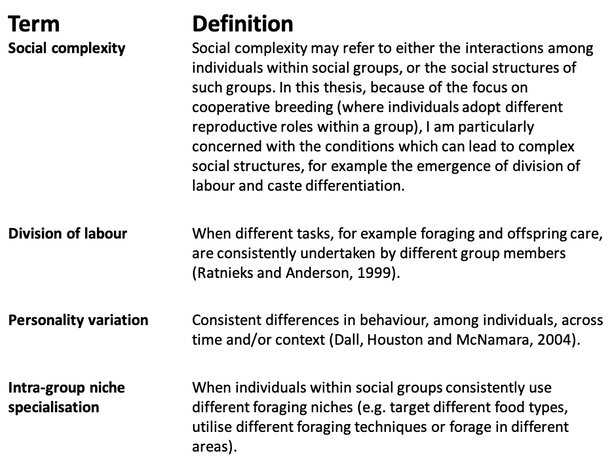 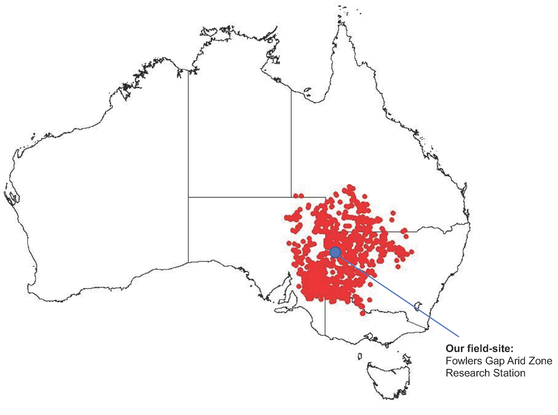 To address these aims, as my model system I use a population of chestnut-crowned babblers (Pomatostomus ruficeps), a 50g cooperative passerine endemic to South Eastern Australia, which has been studied intensively for 14 years (Russell, 2016). During this time, over 90% of the population has been fitted with metal and coloured leg-rings, and a passive integrated transponder (PIT) tag, with a unique alpha-numeric code, allowing each bird to be individually identified. Further, the methodologies required for catching birds and observing key behaviours related to foraging niche have been previously established. This includes an automated nest-camera system, which allows the identification of both the bird, and prey item, that provisioning adults deliver to nestlings (see Browning, Young, et al., 2012; Young et al., 2013 for details).


​
​Next, this species presents an excellent opportunity to investigate the emergence of foraging niche specialisation in response to resource competition within social groups. Babblers breed in groups which vary in size from 2 – 15 individuals (Browning, Patrick, et al., 2012). On average, larger groups achieve higher reproductive success (Browning, Patrick, et al., 2012), favouring increasing group size. However, larger groups are not able to inhabit a larger range during the breeding season, due to constraints on the distance adults can travel from dependent young, and so deplete resources faster than smaller groups (Sorato, Griffith and Russell, 2016). Moreover, the availability of resources is key in determining reproductive success and offspring mortality is most commonly due to starvation (Browning, Young, et al., 2012; Russell, 2016). For these reasons, there is also expected to be strong selection on mechanisms to optimise resource acquisition within a given area (for example, niche specialisation (Svanbäck and Bolnick, 2007)). Importantly in this regard, babbler territories contain a variety of foraging habitats, some which are open and stony, and others which have more cover from predators (Portelli et al., 2009). Groups also forage on a range of prey types, which require the use of different foraging strategies (Browning, Young, et al., 2012). Thus, in principle, this species has the opportunity, capacity and incentive to optimise resource acquisition via niche specialisation, in ways which previous research suggests are likely to be mediated via personality variation (Toscano et al., 2016). Together, these elements allow me to test a range of important questions regarding the role of individual specialisation in reducing competition generated by increasing group size in a cooperative bird, and thus in the role such specialisation may play in facilitating the rise of social complexity in vertebrates.

Thesis structure
Other than the General Introduction and Conclusion, this thesis comprises four main chapters. Chapter 2 is a review chapter. This begins by discussing the evidence so far for personality variation as a driver of foraging niche specialisation, and also of division of labour, and how together, these forms of specialisation may be important means of optimising resource acquisition in social species. In the second part of this chapter, I discuss possible constraints to the emergence of niche specialisation in particular, and the potential implications for a subsequent rise in social complexity. Then in Chapter 3, I investigate how my study species responds to standard personality assays and identify general patterns of personality variation. This is key, because it has previously been noted that the same assay can assess different traits in different species (Carter et al., 2013), and understanding how personality variation might influence niche differentiation in this species relies on accurately interpreting behavioural variation under such standardised tests. In Chapter 4, I investigate personality variation within social groups, testing the prediction that if foraging niche specialisation is mediated by consistent behavioural differences, individuals within groups will differ significantly in personality traits related to foraging niche, and these differences will increase with group size. Then, in the final data chapter (Chapter 5), I test directly for consistent differences in the prey-types individuals within breeding groups deliver to dependent young (i.e. a measure of intragroup niche specialisation) and again investigate whether such differences are more apparent in larger groups. The thesis ends with a section in which I discuss several points raised by my findings, including the implications for the role of individual specialisations in explaining variation in group size, and levels of social complexity, across social vertebrates.
Powered by