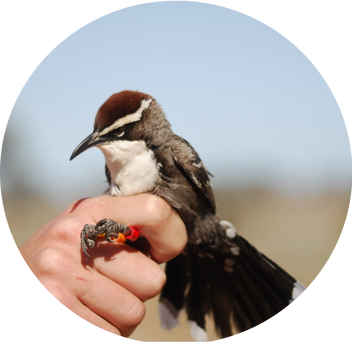 Chestnut-crowned babbler adult
In the summer of 2018 I completed my PhD, in which I investigated the possible causes and consequences of behavioural variation among individuals within cooperative groups.

To conduct my research, I was enormously privileged to spend months at a time in the Australian outback, studying a bird called the chestnut-crowned babbler, a 50g passerine that lives in year-round social groups and breeds cooperatively.

Below is the abstract from my thesis, and also see the link to the general introduction, which together give an overview to my work. If you would like any further details, or to discuss any of the points I explore further, please get in touch. As the chapters are turned into papers, links will be posted here also.


​Abstract
Although group-living is widespread in animals, the degree of social complexity varies markedly within and among taxa. One important precondition for the evolution of higher forms of social complexity is increasing group size. However, this imposes a challenge: finding sufficient food for growing numbers of individuals. One hypothesis is that the (in)ability to avoid resource competition as group size increases, could partly explain variation in social complexity among vertebrates. Increasingly, evidence suggests that resource competition can be reduced via three forms of individual specialisation. These are foraging niche specialisation, specialisation to a role under division of labour (DoL), and as a mediator of these two, personality variation. Yet few studies have directly investigated the role of these specialisations in mediating the costs of increasing group size in social vertebrates. In this thesis, I first review the evidence to date that specialising to a foraging niche, and/or to a task under DoL, is (1) mediated via personality variation and (2) can be a means of reducing competition, generated by increasing group size, in social species (Chapter 2). Then, using the cooperative breeding chestnut-crowned babbler (Pomatostomus ruficeps) as my model system, I empirically test some of the hypotheses posed in this review, regarding foraging niche specialisation and associations with personality variation. In Chapter 3, I show that babblers do show personality variation in traits likely to facilitate niche segregation, and in Chapter 4 that variation among individuals within groups is sufficient to lead to intragroup niche specialisation. However, I find that the level of variation within groups is not associated with group size. Then in Chapter 5, I show that in a direct measure of foraging niche, there is only limited evidence for intragroup specialisation, and again that any specialisation is not associated with larger group sizes. I therefore find no evidence that niche specialisation is a means through which babblers can overcome the costs of increasing group size. I discuss the implications of these results for the rise of social complexity in this system, and social vertebrates generally.
Powered by